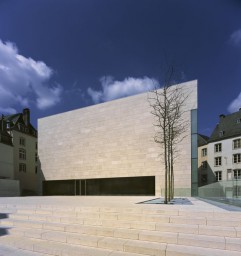 The human body (male or female) in the arts – most often portrait or nude – in painting, sculpture or photography is a common subject and as such present in the works of most artists.
Not only have women photographers today radically moved away from the traditional criteria that characterize the genre, but they have occupied the field by redrawing it – so to speak. The body was transformed under the eye of photographers, becoming an object of quasi-surgical exploration, the mirror of sometimes delirious fantasies.
The art of the photographer becomes a play on appearances and gazes, in which works of art reflect in a sometimes pleasant, sometimes critical and ironic way, the conventions and clichés of our time as if in a distorting mirror.
Image making develops into personal fiction, built around the artist’s own status, his or her perception of attitudes, patterns and roles frequently corresponding to sex or gender, which define femininity or virility. Hence the title “Bodyfiction(s)” which covers a wide range of aspects to be found in contemporary photography.


Maisie Cousins ​​is particularly interested in female beauty, in the context of today’s social and cultural environment – predominantly erotic or consumerist – where the usual clichés about femininity and seduction are a matter of dispute. While recognizing that one easily becomes a “fashion victim”, she is able to play both parts, that of seduction and that of repulsion.
The works of Juno Calypso are in line with those of Cousins. The settings of her photographs are those of crime or horror movies although the dominant colour is not black but pink. Artifice is everywhere and the body of the woman caught in a multitude of mirrors or her face hidden under a beauty mask makes us think of the psychopath in the movie The Silence of the Lambs.
The Japanese Izumi Miyazaki, torn between the icy humour of a filmmaker like Alfred Hitchcock or the more bizarre perversion of a David Lynch, offers us images of young girls both cute and cruel in dangerous situations where they risk losing their heads literally and figuratively.
On a different level – but always in a disturbing and strange world only counterbalanced by criticism of the usual clichés of advertising conveying models of perfect and happy womanhood – the images of Weronika Gęsicka re-contextualize photographs from the 50s and 60s. These often show picturesque family scenes whose total harmony is almost unbearable. Originally from the United States, these stereotypical images of an ideal world describe women as perfect mothers and housewives and men as reassuring husbands.
Eva Schlegel often finds ideas for her works in the images of fashion magazines or newspapers. She enlarges, copies, re-photographs or blurs the original and leaves us only with the elegant shadings of an evanescent memory.The image can be seen as a kind of analytical and critical stance towards the representation of women in the media.
Caroline Heider puts our relationship to images under scrutiny as well. By manually folding photographs from magazines, she changes their form, content and message. The fold eats up some of the information from the image – body parts such as the head, torso or legs disappear into the crack. As a result, major works in the history of photography are reviewed and modified (Edward Steichen’s or Dora Kallmus’s fashion photos), whose representation of the female body may seem conventional in terms of current standards.
With a clear desire to distance herself from the erotic image, Sweden’s Eva Stenram takes up the theme of seduction and desire by restyling the images of magazines from the 50s or 60s. The Pin-Up magazines of those days exposed to the eyes of men what, in principle, was supposed to remain unseen or prudishly covered. Through digital or analogue modification, the artist re-works the images to hide again the object of desire : it becomes a playful game with the spectrum of seduction but based not on exposure but on absence.
Although Annelie Vandendael is a fashion photographer and her work appears in magazines like Elle, her approach to women is tinged with an amused distancing. The image remains beautiful and the woman attractive, but the configuration of the scenery, the locations, and the point of view creates a sometimes comical, sometimes disturbing shift of perception.
In “Faceless Dark and Bright”, the Austrian Mira Loew represents young women whose hair has replaced the face. Her way of picturing a woman negates the traditional portrait; these females seem to play a part in a bad dream because the artist eliminates face, mouth, the eyes; all disappears that allows us to identify a person – the eyes in particular – and we are left with only the secondary identification elements.
Claudia Huidobro also comes from fashion – she was a model – and stages a series called “Tout contre” (a title suggesting multiple meanings) without showing her head and giving the floor exclusively to her body, legs, hands, which occupy a bare and abandoned space. The body explores the limits of space by adding an erotic and choreographic component that contrasts with the austerity of the place.
With Smith we enter a very different world. Here, the erotic self is confronted with a world of dreamlike emotions or harsh reality. The underlying characteristic of this subject is ambiguity or the binary state of mind and body, the hesitation between masculine and feminine aspects of love.
Mike Bourscheid is not a photographer. A man of all trades and techniques like a Renaissance artist, his photographs illustrate his performances; they are the expression of character that lends its body to all kinds of expressions in different settings, he is the crazy inventor or the burlesque anti-hero on the stage of his own fictional theater.