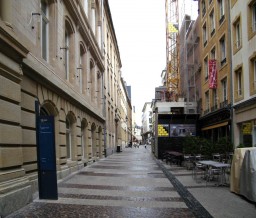 Like photography and sculpture, photography has a long tradition of representing the body of man or woman. Over the last decades, criticism of the representation of the body – particularly that of women – has taken a central position in critical debate, particularly at the instigation of women artists in the wake of feminism.
In the 60s and 70s, this challenge in the artistic community had a very strong political component.
Some fifty years later – while challenging models and clichés continues to be present in artistic production – the means of doing so have changed completely.
Object of fantasy and blue-print of social and individual desires, the body has become a projection surface mirroring the expectations of the individual. Hence the title of “Body Fictions” (Bodyfictions) given to this exhibition.
An artist like Alix Marie operates at the crossroads of photography and sculpture. Her work displays a real three-dimensionality and implies photography as well as sculptural elements. Her way of representing the intimacy of the body, requires the artist to scrutinize every detail of the skin, lips, mouth and to penetrate so to speak the very fabric of the body. “There is,” she writes, “in my work, a relation to the body that, in a way, engages the mouth more than the eye.The work here is an investigation of how to represent intimacy, those moments when the body is blown-up by the camera’s eye, where proximity reveals every detail of the skin.
The world of Carina Brandes is pure enchantment and is haunted in a particular way. There are some naked fairies in her magic world, but there are also distorted body parts, nightmarish figures. One enters above all a world of spooky and creepy figures. Naked women are pursued by monsters or change themselves into wolves or other bizarre animals straight out of the world of Greek mythology. Strange rituals are performed in front of the camera’s eye with animals, weird accessories and other objects! Women are exploring and imploring the sky above and space around. This reminds us of the magical worlds of our childhood haunted by curious beings indulging in playful but strange rituals like Alice in Wonderland.
The photography of Katrin Freisager conveys, in comparison, a much lighter, delicate vision of the female universe which nevertheless harbours undertones of a not so innocent sensuality.In the sensual, sometimes wild, entanglement of arms and legs of the exhibited pictures, the balanced pastel colours seem to slow down the wilder dynamics of the body contortions and the erotic rubbing of bodies. Tights, leggings or bandages imprison arms and legs and seem to provide some kind of protection against possible aggression.
A public figure in the art world since the 80s, after having shaken up all the canons of beauty, ORLAN is part of that first generation of women who saw in the body only an envelope or jacket humans were able to modify at will in order to match their desires, sometimes radically changing the shell. The work presented here is part of the ongoing series on hybridization, in which, through a digital trick, the artist blends the features of her face with those of a pre-Columbian or African head, for example.It is an attempt to re-build myself, to carve myself and to find one of the possible figures of oneself.
Each wave of feminism and each generation sets new priorities and the new media have provided new topics for debate. The Internet and social media have driven the debate on sexuality and identity and female artists have responded to this with a hyper-feminine aesthetics ranging from aggressive denunciation to cute styling.
Star of Instagram, Arvida Byström is the master of this game and stages herself as a beauty queen predominantly in pink while caricaturing some erotic clichés that accompany this type of behaviour and the criteria that define femininity and seduction. This new generation of artists uses strategies of self-representation with great talent while remaining aware of its underlying principles and effects.